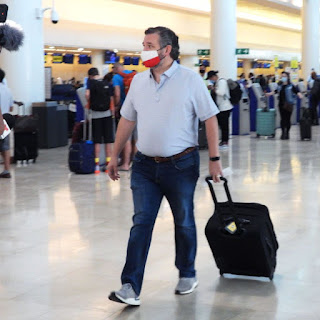 Austin Texas. After learning of Ted Cruz sending his children to a private $30,000/year school which requires masks for all students, teachers, and the administration, the following Texas organization has issued the following statement:

The State of Texas has a proud history of being a bunch of hypocrites including Christians claiming to endorse the “sanctity of marriage” yet have been married and remarried multiple times and politicians claiming to be Christians yet endorsing separating children from their parents. But no one, let us stress, no one is more of a Texas sized hypocrite than Ted Cruz. No one is more of a sniveling coward like Ted Cruz. His hypocrisy makes true hypocrites silly.

Because of this, the members of Society of Hypocrites of Texas (SHIT) have decided to file suit against Ted Cruz for defamation of character. The hypocrites of our state such as every Republican and most Christians are ashamed of his hypocrisy. It make our members look bad.

Let us be very clear. We are not going to take this shit from Ted Cruz.

This entry was posted on Thursday, August 12th, 2021 at 4:08 pm and is filed under Uncategorized. You can follow any responses to this entry through the RSS 2.0 feed. You can leave a response, or trackback from your own site.