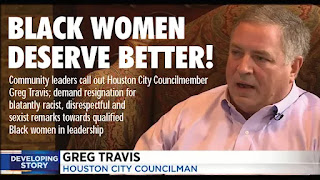 Remember Houston City Council Member Greg Travis? He was the one that quit all of his committee assignments leaving the work to his colleagues. He then quit to run for State Representatives. He was also under fire for making racist comments with many asking him to resign. City Council eventually took no action and he is now running for higher office.

Cy-Fair ISD Trustee Scott Henry, who was endorsed by the Harris County Republican Party, is following in the footsteps of Greg Travis claiming that a more diverse teacher population leads to lower performance. “The more black folk the worse the grades are.” Ok, he didnt say it in that way but from the Houston Chronicle:

Well he should of just said “The more black folk the worse the grades are.” because that is what he said. Mayor Turner, County Judge Hidalgo and others have called for him to resign. And he should. This is an opportunity to make a huge statement to any closet racist.

And present them from ever running for office again.

This entry was posted on Thursday, January 13th, 2022 at 1:32 pm and is filed under Uncategorized. You can follow any responses to this entry through the RSS 2.0 feed. You can leave a response, or trackback from your own site.