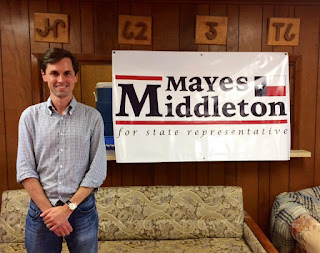 State Representative Money Mayes Middleton is running for the Texas Senate. He has a bunch of suckers donating to his campaign.

According to the Texas Ethics Commission Money Mayes only raised $35,523 from a bunch of suckers including the Galveston County Tax Accessor, Cheryl Johnson who gave him $1000. A total of 101 gullible suckers gave Money Mayes anywhere from $5000 to $5.00. He doesn’t need it.

Money Mayes reported a total of $1,685,523. $1,650,000 came from his own deep pockets. Money has own money to spend and has become the sugar daddy of the district. He will probably set up a fund to put another Qanon republican on the CCISD school board. His challengers for SD11 hasn’t raised any money to speak of. Robert Mitchell President of the Bay Area Houston Economic Partnership only raised $1000 and Bianca Gracia raised only $29,000 most coming from in-kind donations.

Mitchell represents the true conservatives of the Republican Party and would have been a reasonable Senator. Unfortunately Money Mayes will smother the shit out of him with his unlimited pockets.

This entry was posted on Friday, January 21st, 2022 at 1:20 pm and is filed under Uncategorized. You can follow any responses to this entry through the RSS 2.0 feed. You can leave a response, or trackback from your own site.