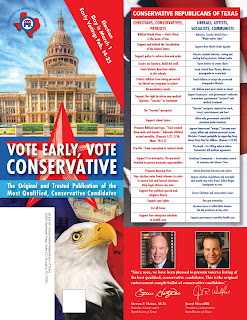 A group called the Conservative Republicans of Texas published an endorsement mailer for the 2022 Republican primary with comments from Steven Hotze, the founder, and Jared Woodfill, the President of CROT and the former Chair of the Harris County Republican Party.

This entry was posted on Monday, March 21st, 2022 at 1:28 pm and is filed under Uncategorized. You can follow any responses to this entry through the RSS 2.0 feed. You can leave a response, or trackback from your own site.