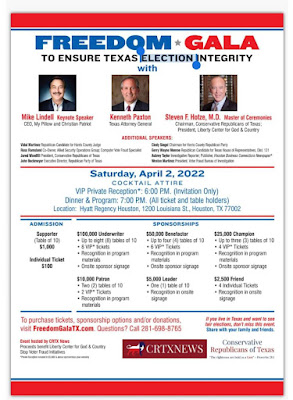 Aided by Attorney General Ken Paxton, Houston conservative activist Steve Hotze is planning to again enlist private sleuths to uncover evidence of voter fraud in Harris County this year, even after one of his own investigators was indicted last year for allegedly holding an air conditioning repairman at gunpoint while in search of phony ballots.

But there is more. The keynote speaker is none other than the pillow guy, Mike Lindell and Aubrey Taylor of Houston Business Connections. Some Democrats might want to take a second look at this and their association with Aubrey Taylor.

Hotze is an extreme far right radical republican. According to the Houston Chronicle:

A longtime activist, Hotze has supported numerous far-right causes and candidates over the last few decades, and is, perhaps, best known for opposing LGBTQ issues. During the March primary, his political action committee, Conservative Republicans of Texas, sent out a mailer touting its support for “Christians, conservatives, patriots” who promote “Biblical marriage,” “school choice” and the right to refuse vaccines.

Aubrey Taylor is the publisher of Houston Business Connections and makes endorsements of extreme far right candidates and a number of Democrats. As with a number of endorsement organizations many of the candidates have no idea they are being endorsed and hopefully would not be interested in their endorsement or support. Below is just a sample of who he is endorsing in his publication.

Democrats really need to get away from Aubrey. 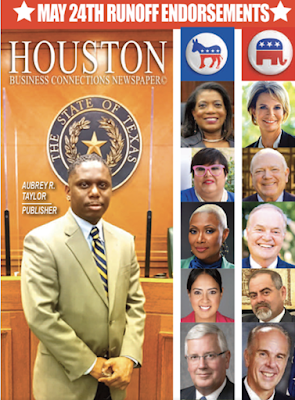 This entry was posted on Saturday, April 2nd, 2022 at 12:39 pm and is filed under Uncategorized. You can follow any responses to this entry through the RSS 2.0 feed. You can leave a response, or trackback from your own site.