Extreme white wing fail to take over the CCISD School Board 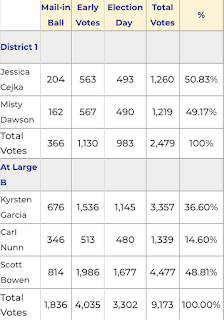 It’s truly sad that the control of the community’s non-partisan school board was almost taken over by a couple of extreme white wing members of the Republican Party.

In last night’s election Krysten Garcia, an excellent candidate, former teacher, almost knocked off the sitting board member, Scott Bowen. Overall most voters wanted Bowen out of office splitting their votes between Carl Nunn and Krysten. Bowen paid out his ass to win this race. He spent at least $17,000 and we will not know how much he used of the $20,000 loan he made to the campaign. He still has an ethics charge pending against him at the Texas Ethics Commission.

In the shocker, Misty Dawson, probably the worst candidate in the history of the CCISD School Board, second only to Bowen, lost by under 100 votes. To say Dawson was an ignorant a**hole when it came to education and CCISD policies would be an understatement. This lady was truly a political moron and yet she almost won. She lent her campaign $20,000 in her losing effort. It truly is sad that the voters in that district were more interested in supporting their far white wing political party filth instead of voting for who is best for the students, parents, and teachers. Hopefully Dawson will not join Stephanie Parizo and start screaming voter fraud much like Steve Hotze did……and is now charged with a number of felonies that could send him to jail for 20 years.

On a very good note, Jessica Cejka, Dawson’s opponent, and one of the most qualified candidates will be taking a seat at the next board meeting. Thank you Jessica for running!

Thanks to Carl Nunn and Krysten Garcia for running. It’s always hard to run especially when up against endless money and partisan party filth.

This entry was posted on Sunday, May 8th, 2022 at 12:16 pm and is filed under Uncategorized. You can follow any responses to this entry through the RSS 2.0 feed. You can leave a response, or trackback from your own site.