There ought to be a law against fake/false endorsements 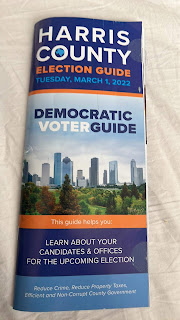 I’ve had a boner on this issue for sometime.

Over the last few elections a number of organizations and candidates have published “voting guides” or endorsement cards for various candidates. The guides such as the one issued by Fort Bend United looks official, expensive, and as if it came from Harris County. (it didn’t) And then there is the epic mailer that was sent to over 100,000 voters by Eric Dick running for Houston City Council. I’ve beat that dead horse long enough. You can read about the outcome here:

So after a couple of years of investigation and a preliminary and formal hearing, Dick was fined $30,000 and was referred to the State Bar. (Dick is an attorney) This fine was the 2nd highest fine accessed by the Commission, second to the fine of $75,000 against Harris County Commissioner Jerry Eversole.

Dick’s mailer looked as if prominent Black elected officials had endorsed a slate including him. They hadn’t. None of them had. This wasn’t the first time for Dick. During his previous run for City Council he took pictures of himself with elected officials and sent a card that implied they had endorsed him. (They didn’t)

So, what can be done? We need a “Don’t be a Dick” bill. A bill that would make it illegal to imply, suggest, or otherwise make one believe that an individual has endorsed someone without their expressed consent to do so. Currently there is a law in place that makes it a crime to alter a video in an attempt to deceive voters.

This is needed for these fake and/or misleading endorsements. Until then, don’t be a dick.

This entry was posted on Tuesday, May 24th, 2022 at 3:09 pm and is filed under Uncategorized. You can follow any responses to this entry through the RSS 2.0 feed. You can leave a response, or trackback from your own site.