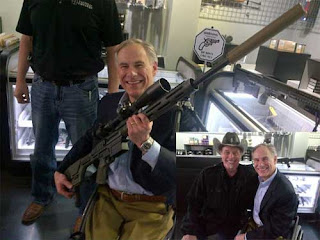 Out of 31 mass shootings across the country Texas leads the nation with 8. These include shootings in El Paso, Uvalde, Santa Fe, Austin, Sutherland Springs, Odessa, and Killeen, twice. 142 Texans were killed and 191 wounded.

Five of these shootings have occurred under the leadership of Greg Abbott. After the latest shooting in Uvalde killing 19 children and 2 teachers, Abbott and the other republicans stopped giving “thoughts and prayers” for fear of being mocked for simply repeating “thoughts and prayers” like they did after Santa Fe and Sutherland Springs, and Odessa, and Killeen, and El Paso.

After the shooting in Santa Fe Lt Governor Dan Patrick vowed to put metal detectors into schools. He never did. In memory of the victims of Santa Fe Greg Abbott signed a bill to allow anyone to carry a loaded assault rifle in public without a license or training. He was proud to have named Texas as a “Sanctuary City” for guns signing seven bills including open carry and allowing the purchase of silencers. None of the parents who lost children at Santa Fe were invited to the signing ceremony.

This entry was posted on Wednesday, June 29th, 2022 at 11:24 am and is filed under Uncategorized. You can follow any responses to this entry through the RSS 2.0 feed. You can leave a response, or trackback from your own site.