No Place but Texas: Machete rules! 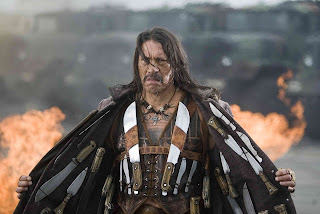 I’ve said it before:

We have a saying here in Texas “We do things bigger in Texas”. It isn’t really true, but its a cheap simple minded saying to make Texas seem like it’s something it isn’t. But Texas does have some of the biggest idiots elected to office.

Case in point. According to CNN:

Starting this fall, adults in Texas can openly carry knives with blades longer than 5.5 inches. In fact, swords, spears, daggers, sabers, bowie knives and machetes are all perfectly fine to tote around. Pretty much anything you can whip out in a Dungeons and Dragons battle is fair game.

As someone on Facebook said “You never know when you might be attacked by a snake or bison.” So not only do we have to watch play soldiers walk around with their hands on their guns we also have to worry about Texas sized idiots carrying knives, swords, and machetes!

As Machete might say “Machete don’t play soldier”.
Welcome to Texas bitches. No Place but Texas.

This entry was posted on Tuesday, July 18th, 2017 at 11:16 pm and is filed under Uncategorized. You can follow any responses to this entry through the RSS 2.0 feed. You can leave a response, or trackback from your own site.