Texas Congressional District 7. It's a race!

Well this IS exciting!

According to the Federal Elections Committee there are 7 (yes 7) Democratic candidates seeking the nomination in the primary in order to challenge John Culberson. One thing about raising money. The more you raise, the more you raise. When contributors see you have the ability to raise money they tend to give money. The FEC has  reports for all candidates here. According to the Houston Chronicle:

A crowded field of Democrats eyeing a chance to take on Republican John Culberson in his west Houston congressional seat have raised more than $1.2 million in the last three months, according to new campaign finance reports. 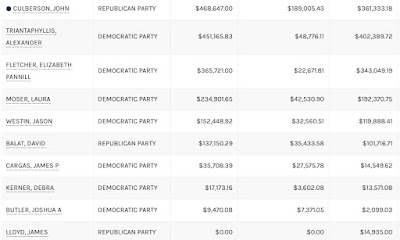 Culberson hasn’t had to run a campaign since he has been in office spanning 16 years. Culberson is a birther, climate change denier, and Trump supporter even after his sexual “grab her by the whatnots”assault tape. He supported banning immigrants based upon religion, believes in the sanctity of marriage between one man and one woman at one time, and wants to return health care to the insurance industry. He has embraced multiple conspiracy theories on ACORN, Planned Parrenthood, and gun control to name a few.
The only visible thing Culberson has accomplished was finding funding for the Culberson highway on I10 to Katy, a 10 lane monstrosity with dedicated lanes for those who can pay. Culberson has two primary challengers, one raising only $14k and another with $101K.
The Democratic primary in CD7 ought to be exciting especially after the next financial report. These are good candidates. They have the ability to lead and to governor. As one person said “it’s kind of exciting for a change!”

Good luck to all Democrats and thank you for running!

This entry was posted on Friday, July 21st, 2017 at 2:28 pm and is filed under Uncategorized. You can follow any responses to this entry through the RSS 2.0 feed. You can leave a response, or trackback from your own site.

One Response to Texas Congressional District 7. It's a race!