Raising Campaign Cash (From your own wallet) Kathaleen Wall

There ought to be a law….

Kathaleen Wall is one of the republicans running to replace Ted Poe in Texas Congressional District 2. A quick look at her fundraising numbers might make one say something like “Needless to say the republican candidate has millions.” but looking beneath the surface tells a different story.

Here is the FEC report on the candidates: 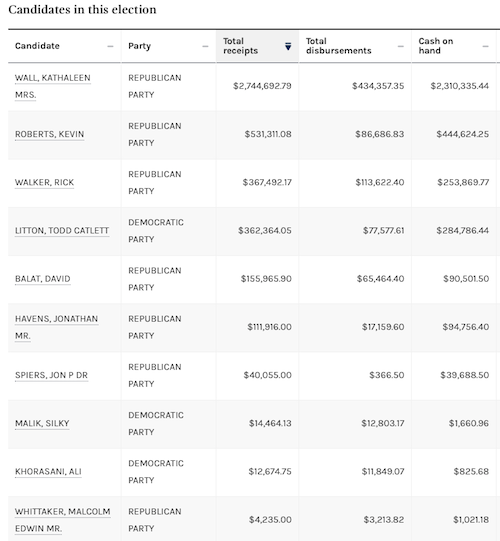 Kathaleen Wall did not list her $2,733,801 donation as a loan but as a candidate contribution. I know if a donation is listed as a loan then it could be paid back, with interest, from campaign contributions but if it is listed just as a self financed campaign donation then it might not be refundable. Regardless there ought to be law preventing people from buying a race like this.

You can view her entire report here.

This entry was posted on Thursday, February 1st, 2018 at 7:29 pm and is filed under Uncategorized. You can follow any responses to this entry through the RSS 2.0 feed. You can leave a response, or trackback from your own site.