As I said yesterday:

Candidates need money to introduce themselves to the community, to buy literature, to pay staff, to buy resources like internet access, signs, media buys, and campaign headquarters. If you can’t get your message out you can’t expect voters to vote for you.

You can review all the fundraising information for all candidates in the Congressional Districts of Texas by visiting this link. So with a bit of commentary, here are the numbers from the FEC.gov website:

Congressional District 2
Needless to say the republican candidate has millions, $2.7 million to be exact, but it is all of her money! See my post here. Democratic candidate, Litton, has raised $367,492 to date. More than any other candidate, republican or Democrat excluding any loans or self financing. Some candidates do not have any data on the FEC site. I do not intend to update later. They are not actively raising money and should regroup and run at a later date. 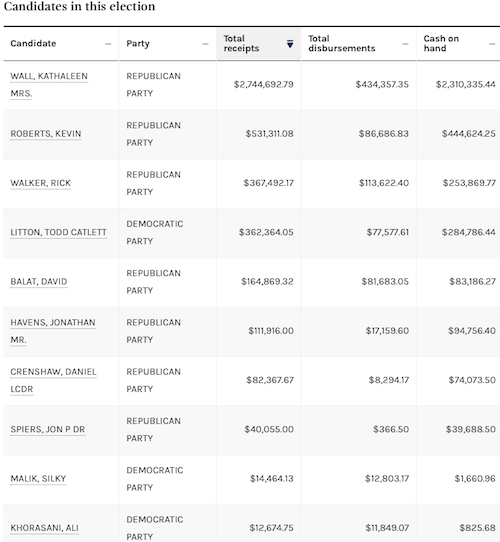 Congressional District 7
Wow. Lots of money being raised in this period. Alex has raised nearly $1 Million. 4 of the 7 candidates look viable. Moser brought in a considerable amount this period mainly from ActBlue which is how it is reported. I thought that the contributions had to be itemized with who actually contributed the money via ActBlue, but I may be wrong. The bottom 3 Candidates should consider dropping out, endorsing someone, then put their resources into the winner of the primary. 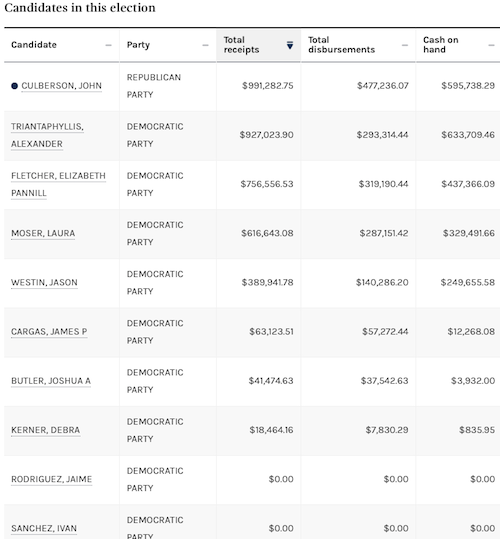 Congressional District 29
Notice that Muhammad Tahir Javed has an incredible amount for a single reporting period of $647,775 but……that includes a $400,000 personal loan from his own pocket.The bottom 4 candidates have about $39,000 combined which includes a $27,683 personal loan by Roel Garcia into his campaign.The bottom 4 might consider dropping out. As I have said “This is not a game”. 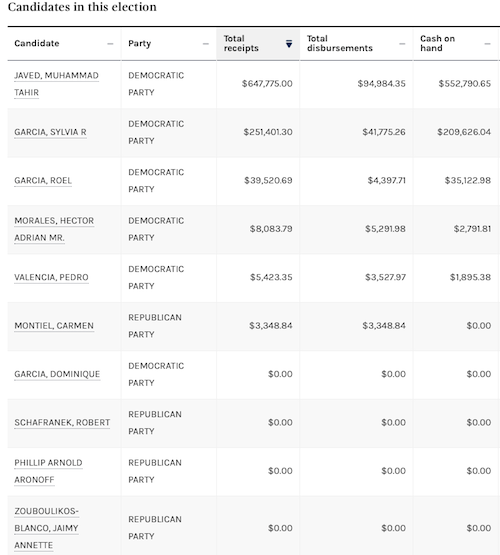 This entry was posted on Thursday, February 1st, 2018 at 4:30 pm and is filed under Uncategorized. You can follow any responses to this entry through the RSS 2.0 feed. You can leave a response, or trackback from your own site.