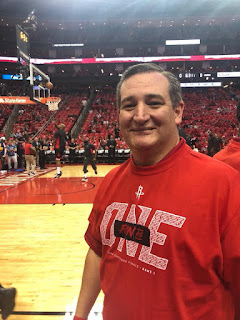 This is hard to make up.

Instead the Cruz campaign is asking for donations to his campaign. You have to wonder why Ted Cruz would target only those in San Antonio. He didn’t send the notice to potential donors in Houston or Dallas. Instead he only focused on San Antonio. Maybe it has to do with his latest appearance and selfie taken from game 7 of the Rockets, Warriors game. Cruz attended. We lost. He left early. The “Summons” letter was considered a threat to Spurs fans, and San Antonio loves their 5 time world champions.

“Spurs fans should seriously consider giving to Ted Cruz for Senate or risk the  possibility of Cruz buying Spurs season tickets and attending every game.”

Fundraising from the summons letter has been brisk. “No one likes Ted. Stay in Houston.”

This entry was posted on Wednesday, May 30th, 2018 at 1:12 pm and is filed under Uncategorized. You can follow any responses to this entry through the RSS 2.0 feed. You can leave a response, or trackback from your own site.