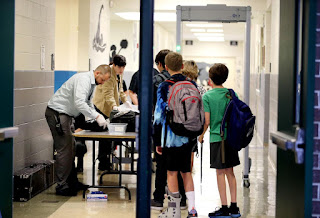 Patrick might want to go back to grade school and refresh his math.

According to the Texas Tribune TX Lt Governor Dan Patrick is (partially) donating up to 10 metal detectors to the Santa Fe School District where 8 kids and 2 teachers lost their lives due to gun violence. From the Texas Tribune:

It doesn’t take a rocket scientist to figure out that this is an incredibly stupid idea an a great tax funded give away to metal detector companies. Get your slide rules out and lets do the math. Lets assume each school will need at least 1 metal detector. There are over 9300 public schools and 1200 charter schools in Texas. Each metal detector costs $4000 (not including the training, periodic calibration, and maintenance). So..

1x10500x$4000= $42,000,000 for just 1 detector per school. Assuming we average a total of 3 per school and you have a $126 Million price tag which does not include the cost of training, periodic calibration, maintenance, technical support, onsite personnel. $126 Million.

Beside the $126M initial price tag, this isn’t a solution to the problem. How will metal detectors protect the Band kids as they practice in the parking lot? Or the football players on the field? Or those gathering in front of the school waiting for it to open?
How will metal detectors in Sante Fe protect our families from a gun nut at a concert? At a church? At a night club? At a movie theatre? On the streets? Only a moron would think this is a good idea. This is nothing but a Dan Patrick gimmick as he heads into an election season with teachers lining up against him. Patrick needs to go back to school and learn some math.
BTW in 2010 there were nearly 30,000 churches in Texas. Do the math.

This entry was posted on Saturday, July 7th, 2018 at 12:00 pm and is filed under Uncategorized. You can follow any responses to this entry through the RSS 2.0 feed. You can leave a response, or trackback from your own site.