I’ve tried to eat at El Tiempo Cantina here in Clear Lake but it has always been too crowded. Then I saw the menu and the prices. $29.99 for 1/2 lb of fajitas? Yeow! But I digest…digress…. 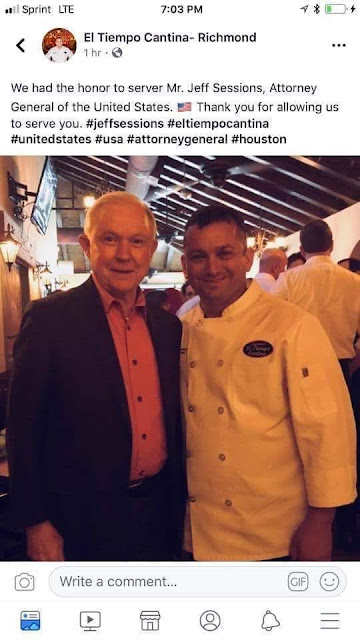 The chef-owner of El Tiempo Richmond received a well deserved social media beat down for posting a pic of himself with the United States Attorney General Jeff Session saying “we had the honor to server Jeff Sessions”. (his words not mine)

Everyone who owns a restaurant has the right to serve who they want, after all this is America. But everyone also has the right not to eat there especially after a half baked decision to post this pic to their Facebook page. This bothers me for a number of reasons.

Sessions is well known for his hateful, racist, policy of separating brown faced children from parents who are seeking asylum and help from the United States. The policy is racist, inhuman, rotten, and happily implemented with honor by Jeff Session against Latino families. It is just that simple.

Sessions could have taken his fat ass to a local barbecue restaurant. Instead Sessions picks a Mexican restaurant just like the Director Homeland Security did. She was heckled to the point of having to leave. Sessions on the other hand was served with honor and a pic was taken with him.

Its like Sessions did this on purpose to rub his racist policies into the faces of the Latino community with the help of the restaurant chef-owner. The owner had the opportunity to look Sessions in the eye and respectfully tell him “El Tiempo does not in anyway support the practice of separating children from parents or any other practices of the government relative to immigration. Enjoy your food.” and leave it like that. Take his order. Serve him his goddamn food. Give him the bill. That is all he need to do but instead he joined Sessions rubbing one out in the restaurant.

The response from social media to his obvious delight in posting the pic was quick. Quick enough for him to quickly remove the photo and quickly attempt a lame defense. It was quick. And I’m not buying it. I’m not buying his damn food either. It’s America after all.

This entry was posted on Saturday, August 11th, 2018 at 8:32 pm and is filed under Uncategorized. You can follow any responses to this entry through the RSS 2.0 feed. You can leave a response, or trackback from your own site.