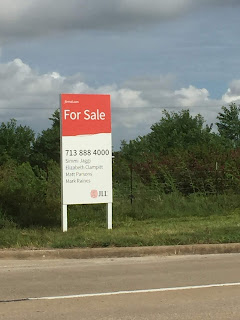 Candidate for Harris County Commissioner, Adrian Garcia, has raised the flag on a proposed petrochemical tank storage facility at Clear Lake City Blvd and Hwy 3. From his press release:

“I’m taking a stand against polluters who are making our families and children sick,” said Garcia. “It is reported that Hurricane Harvey’s biggest polluter, Magellan Midstream Tank Terminal in Galena Park, now wants to build a massive petrochemical tank terminal of 58 tanks at the edge of Clear Lake on land that flooded Horsepen Bayou so badly a car was swept off Hwy 3, drowning the driver during 2015’s May rain event,”.

The proposed location is across the street from Ellington and could contribute to an high flooding risk area. During heavy rains this intersection floods easily as well as Clear Lake Blvd from Hwy 3 to the Bay Knoll subdivision. Last Friday I saw a crew putting up the for sale signs for this property that has been home to oil rigs and cattle for decades. About 10 years ago the community killed a proposal that would allow the dumping of sewer waste on the property as “fertilizer”. They were full of fertilizer. NASA management helped stop this by citing a hazard from birds to their aircraft.
A map provided by the Southbelt Leader shows the proposed 58 storage tanks from Hwy 3 to I45 on Clear Lake City Blvd. Click on the pic for a larger view. 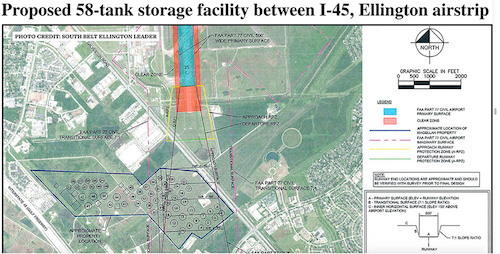 Besides the flooding hazard, according to the press release, the company proposing the tank terminal, Magellan, had a spill of  ½ million gallons of gasoline during Harvey. So we will need to keep an eye on this proposal. Clear Lake residents have been successful in stopping the fertilizer dumping, the proposed San Jacinto Rail carrying explosive chemicals north of Clear Lake, and was successful in stopping the development of the old golf course.
Surely there will be hearings on this.

This entry was posted on Wednesday, September 5th, 2018 at 3:27 pm and is filed under Uncategorized. You can follow any responses to this entry through the RSS 2.0 feed. You can leave a response, or trackback from your own site.