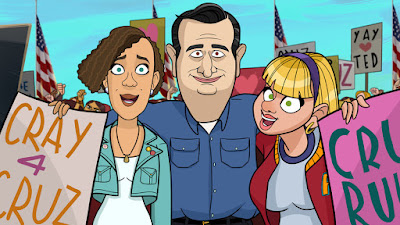 Ask yourself this: If you had a choice to travel across the country in a Fiat with either Ted Cruz or Beto O’rourke who would you choose?

Nobody likes Ted Cruz. Even members of his own party don’t like Ted Cruz and for good reason. Ted is one of those guys that are just hard to listen to. He talks as if everyone is sitting on the edge of their seats waiting for him to complete a sentence full of awkward pauses confusing people on when to either clap, get up and leave, or cut their ears off. Here are a just a few reasons why #NobodyLikesTedCruz.

He won’t defend his own family. Donald Trump called his wife a dog face causing Ted to go on a tirade:

“It’s not easy to tick me off,” Cruz said. “I don’t get angry often. But you mess with my wife, you mess with my kids, that’ll do it every time. Donald, you’re a sniveling coward. Leave Heidi the hell alone.”

Yet months later he sucked up to Trump as if he never said anything. Even his wife, Heidi, hasn’t forgiven Trump. How can you trust someone like Ted Cruz to defend your family when he won’t even defend his own?

He wants to cut coverage for pre-existing conditions. Lucky for Ted and his family, his tax funded healthcare policy covers pre-existing conditions. Always has. Always will. And you pay for it. So as I said, how can you trust Ted Cruz with the health care of your kids? You can’t. Once he is successful your family will not be covered while his family will. Sleep well.

He’s from Canada. Unlike his opponent, Ted was born and raised in Canada as Raphael Ed Cruz, or as Canadians call him “Ted”. Aye. Once he was recently outed, Ted quickly denounced his dual citizenship. He won’t defend his family or his citizenship.

He shutdown the government. It was all about Ted Cruz. Cruz took to the Senate floor to filibuster and shutdown the government because the Affordable Care Act was helping people stay well. He read Green Eggs & Ham. Even his own party was tired of him and did not support the shutdown, but like the cowards they are did nothing to stop it.

It’s all about Ted. It’s hard to believe a thing Ted says. You have to wonder when he makes a statement about a situation if he is truly concerned or is he thinking 2 steps ahead trying to make the situation all about him. Everything Ted does is for Ted and his achieving the high throne.

There are so many other reasons why #NobodyLikesTedCruz. Personally I can’t imagine driving across the country listening to Ted Cruz signing along to ABBA.

This entry was posted on Wednesday, September 12th, 2018 at 12:32 pm and is filed under Uncategorized. You can follow any responses to this entry through the RSS 2.0 feed. You can leave a response, or trackback from your own site.