Nothing is too low for Pete Olson and Fort Bend Republicans 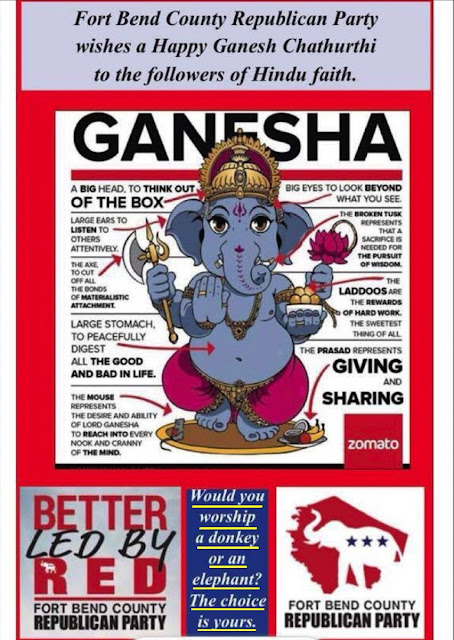 Following in the footsteps of their lord and savior, Donald J. Trump, Texas Congressman Pete Olson and the Fort Bend Republic Party has stooped to a new low in reaching out to the Hindu American voters. From the Hindu American Foundation:

Houston, TX (September 18, 2018) — The Hindu American Foundation today called upon the Fort Bend County Republican Party to clarify its intentions regarding the use of Lord Ganesha in an ad urging support of the Republican Party.

The ad appeared to be an attempt to reach out to Hindus on the occasion of Ganesh Chaturthi and urged Hindu American voters in the county to vote Republican by asking “Would you worship a donkey or an elephant? The choice is yours.”

This leaves a number of questions on the table, one being: Why is Pete and the republic party reaching out to Hindu Americans? They never have before. Maybe it’s because Olson is being challenged by Sri Preston Kulkarni one of the most qualified candidates running for Congress. Don’t believe me, go read his bio. Sri is giving Pete all he can handle and his party has made a mistake in their outreach.

Can you imagine if the Democratic Party reached out to Christians with a reference to Joseph and Mary riding a donkey and not an elephant? Neither can I because mixing religion and political ads is just an incredibly stupid idea.
The second question is: How low will they go? We haven’t seen bottom for the republic party in Texas. Fort Bend is just catching up. There is no bottom to what they will say or do to feed their base of politically ignorant, lying, bunch of racists.
Just like their president.

This entry was posted on Thursday, September 20th, 2018 at 11:08 am and is filed under Uncategorized. You can follow any responses to this entry through the RSS 2.0 feed. You can leave a response, or trackback from your own site.