Left with Egg on his face Texas Congressman Pete Olson 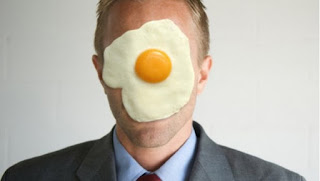 Texas Congressman Pete Olson CD22 isn’t as conservative as one might think. Just because you have an R behind your name doesn’t mean you are a Conservative. In the case of Pete Olson it means Conspiracy. Even the Houston Chronicle stated:

He has pandered to bizarre conspiracy theories on talk radio and inaccurately claimed that Pakistan was responsible for the terrorist attacks on 9/11 — it wasn’t.

But there is more. For instance….

No Prayers at Military Funerals
In 2011 Olson fell for the fake conspiracy concerning the National Cemetery not allowing prayers at a funeral for a veteran.  According to his press release:

Unfortunately his “media reports” came from breitbart and Michael Berry, the white wing radio host of Houston. It wasn’t true. Olson went on to file various religious freedom legislation that died on the House floor.

Health care stunt
In his only town hall meeting held in LaMarque back in 2009, Olson was taped using a woman and her son as props in a failed attempt to warn about the Affordable Care Act. He described how the private insurance industry and private hospitals and private medical doctors turned down a treatment for her son. She eventually received the care (provided by government provided healthcare) but Olson went on to claim that under the government’s Affordable Care Act, she would have been turned down.

Someone (me) with a camera yelled “THE GOVERNMENT DIDN’T TURN HER DOWN! THE PRIVATE SECTOR DID!”. Olson looked like a deer caught in the head lights of a truck. His look of stupidity earned him a spot on Keith Olberman.

Honoring James O’Keefe III
Olson was on the floor of our House introducing a resolution to honor Jame O’Keefe. O’Keefe secretly recorded actions by ACORN, an organization dedicated to helping low income people. O’Keefe’s video was later found to be heavily doctored and false. According to his press release:

Rep. Pete Olson today introduced a resolution in honor of Hannah Giles and James Oâ€™Keefe III for their diligent investigative journalism exposing the fraudulent and potentially illegal activities of the Association of Community Organizations for Reform Now or ACORN.

O’Keefe was eventually sued, issued an apology, and paid a settlement leaving Pete Olson with egg on his face.

Space Shuttle
And while Olson was busy chasing conspiracy theories his district lost out on a Space Shuttle berth at Space Center Houston. If there was one place a Shuttle should have been placed as a museum piece, it was here in Houston. Once again Olson failed leaving egg on our face.

This entry was posted on Monday, October 15th, 2018 at 1:21 pm and is filed under Uncategorized. You can follow any responses to this entry through the RSS 2.0 feed. You can leave a response, or trackback from your own site.