In the word of Donald Trump: SAD! 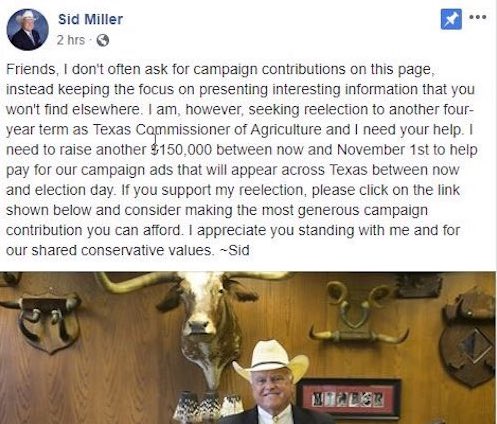 Texas Agriculture Commissioner Sid Miller is begging for donations and for good reason. He has an outstanding loan of $195,000 and he has no credible fundraising capability. From a former post:

Miller has a problem. First, he is a Texas sized jackass. Even the Texas Farm Bureau will not endorse him for fear of getting kicked in the what nots by their wives. Like Ted Cruz nobody likes Sid Miller and nobody is giving him money except for his 13 buddies. It’s obviously drying up so he is begging for dollars.

The reality of the situation is expensive. If Miller loses his bid for re-election it will be very hard to have a fundraiser to pay off his debts. If he loses he will be as popular as herpes at a hot tub party. No one will go to his fundraiser. No one will give him money. He will be stuck with a $195,000 loan.

This is what happens when you are a Texas sized jackass.

This entry was posted on Wednesday, October 24th, 2018 at 10:35 am and is filed under Uncategorized. You can follow any responses to this entry through the RSS 2.0 feed. You can leave a response, or trackback from your own site.