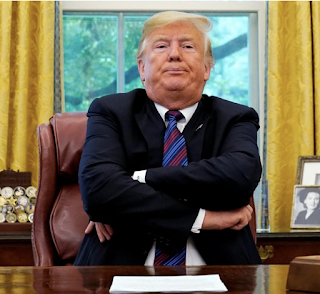 The big question for 2019 for the remaining Republicans in Congress is “What do we do with Trump now?”. What will the GOP do to minimize their upcoming loses in 2020? The voters in 2018 spoke loudly with the GOP losing 40 seats in Congress. In Texas there was an 180% increase in voting from the last midterm election causing a huge blue wave to wash across every part of the state. All indications show the 2020 elections will be worse unless they take swift, decisive action. Here is a suggested threee part plan for the floundering party of conservatives.
Phase 1. Pass a bill to fund the remaining parts of the Government with funds for the Department of Homeland Security but no wall. Trump has already says he would accept a fence. Give him $1.8 Billion for DHS and let them rebuild or repair the existing fence with a “steel slat barrier”. Trump will declare victory or he will be shamed by the right wing media and veto the bill. Congress will have to override his veto knowing that once they turn on the president they lose the 35% Trump base. At this point it’s either face the 35% in the primary or the 65% in the general election.
Phase 2. Remove Trump from office. Pence is a right wing, religious, zealot but he isn’t nuts! He isn’t politically ignorant. He knows how to run a government. Pence would bring stability to the country and world. He would have a hard time explaining why he will overturn the policies he has supported while VP but he can and must do it. The only people at this point who would not accept Pence are the extreme right wing trump supporters. Our country needs Pence. The stock market needs Pence. Our allies need Pence. The GOP desperately needs Pence.
Trump can be removed by impeachment but the republicans should be forced to file the articles of impeachment and carry the ball. Trump is their problem. They created him and allowed him to fester by not performing their duties as the third part of government. The Senate would not have to remove him. He would quit and blame it on everyone except himself.
Phase 3. Continue to the probe into Trump and his family. The GOP must wash this stained out of their party. Continue the probe and demand the rule of law to applied. At least look like the GOP is the party of “Law and Order” upholding the rule of law, for once, instead of applying the law based upon who rules.
If the GOP wants to survive the upcoming elections they will need to grow a pair or lose them in 2020. At this point I would gladly accept Pence as President.

This entry was posted on Thursday, December 27th, 2018 at 12:35 pm and is filed under Uncategorized. You can follow any responses to this entry through the RSS 2.0 feed. You can leave a response, or trackback from your own site.