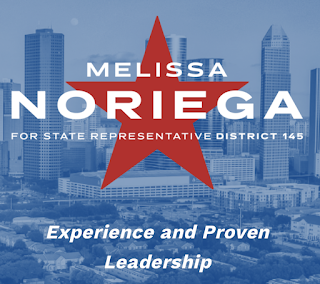 According to the Houston Chronicle 8 individuals have filed for State Representative in House District 145. From the Chronicle:

The Democratic-leaning district, which covers part of the Heights and runs through downtown and South Houston to Beltway 8, voted 67 to 29 percent for Hillary Clinton over Donald Trump in 2016.

HD145 is just north of the Clear Lake. I have known Melissa since I joined the party back in the early 90’s. I worked on her campaign for City Council and will do so for this race. Looking over the field of candidates there is no one with the experience Mellisa can bring to the district. In a time where the Democrats are the minority party in the House, it is very important to have someone who is qualified and who has the political experience required for the office.
Besides representing the Houston area as an At Large City Council Member, Melissa was appointed to the Texas State House when her husband was called to serve in Afghanistan to fulfill his term. She has the experience and there will be no need to learn on the job.
The district and our state will be faced with very strong attacks on important issues such as education funding, immigration, and property taxes. It would be advantageous to have someone in that position that can hit the ground running and defend our positions on these issues.
Visit her website at: www.NoriegaForTexas.com for more information on her background and experience.

This entry was posted on Friday, January 4th, 2019 at 9:11 pm and is filed under Uncategorized. You can follow any responses to this entry through the RSS 2.0 feed. You can leave a response, or trackback from your own site.