The Honorable Rashida Tlaib should apologize 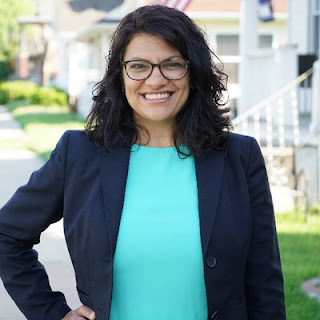 It really isn’t hard to apologize after calling an elected official a MFer like The Honorable Rashida Tlaib did when referring to the President of the United States. We all, at one point in our life, have had to make sincere apologies for some of our classless actions. We are taught as young children that apologies are expected and demanded when warranted. How many times have our parents said to us “Tell him your sorry”?. Apologizing is something we must do at times and Congresswoman Tlaib should do it at this time. Here is an example of a perfectly good apology:

“Last week I made a very unfortunate comment referring to the President of the United States that I deeply regret. I want to apologize to Speaker Pelosi for causing this distraction to passing our progressive agenda and to my constituents and the members of the Democratic Party for this vulgar language.”

She doesn’t owe an apology to Trump for calling him what he is but she does owe it to the Speaker, the Party, and to those who gave her the title “The Honorable”. Calling an elected official a MFer or calling anyone an MFer is conduct unbecoming of someone with “The Honorable” in front of their title. It is disrespectful. It is vulgar. It is low class. It is a sure fire way to be minimized.

The President is a low class, vulgar, racist, politically ignorant, rotten asshole of a human being who calls people school yard names, and has used horrible language in the past but that does not give us the right to condone one of our own when they do the same. We are not the republican party. We are not Trump. We are suppose to be better.

Running for office and serving is not a game. The Honorable elected officials, at times, must send our kids to war. They pass legislation that means life or death for many. This isn’t a high school name calling session. This is very serious work that requires The Honorable to be honorable. If we condone Tlaib’s dishonorable act of calling elected officials vulgar names then we have lost our right to condemn Louie Gohmert when he calls Speaker Pelosi a stupid b****.

We are better than this.

This entry was posted on Saturday, January 5th, 2019 at 4:54 pm and is filed under Uncategorized. You can follow any responses to this entry through the RSS 2.0 feed. You can leave a response, or trackback from your own site.