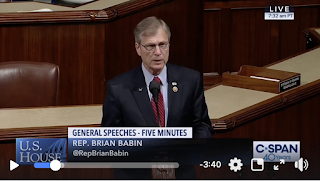 Former Vice President Joe Biden has been in the news a lot lately, along with the predictable narrative that he has a distinguished record on matters of foreign policy. But if you actually look at his record, you’ll see that the opposite is true. As former Secretary of Defense Robert Gates said, “I think [Biden] has been wrong on nearly every major foreign policy and national security issue over the past four decades.” I took to the House floor today to address those who may believe Biden is the right man to lead our nation as President.

Babin was using the House floor to campaign against the Democratic front runner Joe Biden questioning whether he was the “right” man to lead our nation. He continued:

Joe Biden does not reflect the traditional conservative values of the Republican Party. He has not had sex with a porn star, paid her off, or lied about the entire affair. He hasn’t lied every single day to the American people. He hasn’t mocked a disabled American or a decorated deceased war veteran. He hasn’t created a Trillion dollar deficit, added $2 Trillion to our debt to China. He hasn’t put dirty Mexican children in cages away from their mothers or called white supremacist “fine people”. He hasn’t alienated our allies or coddled the likes of dictators like Kim Jong Un. He hasn’t spoken in support of dismembering a journalist as long as we make money doing it. He hasn’t even grabbed any women by the damn p**** for god’s sake! Besides Trump is an asshole and it is tough to be an asshole. I yield my time.

Yeah. That is what he was thinking.

This entry was posted on Friday, April 26th, 2019 at 1:03 am and is filed under Uncategorized. You can follow any responses to this entry through the RSS 2.0 feed. You can leave a response, or trackback from your own site.