FYI: Tony Buzbee is a Republican. When he needs to be.

Buzbee is playing both sides.

Mary Hamon, Communications Director for Tony Buzbee questioned the owner of a spreadsheet which listed Tony Buzbee as a Republican and asked that it be changed to “Independent”. Here is the request via Erik: 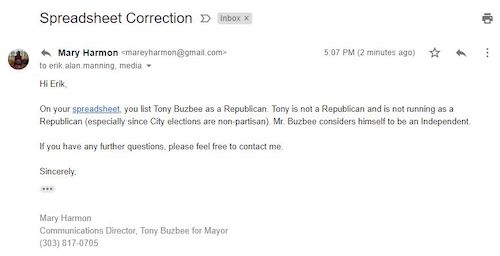 The spreadsheet will not be changed and for good reasons. Buzbee used to be a Democrat. He was the Chair of the Galveston County Democratic Party for a short time. He ran against Larry Taylor for State Representative. That was all before he became very wealthy. Then he switched to the Republican Party.

As I have said before:

On top of that Buzbee is courting the Houston Pastors Council, and extreme right wing, of the Republican Party that prides themselves in attacks on the gay community.

Buzbee is also playing both sides. He donated $110,000 to the Harris County Democratic Party and tens of thousands to various judicial candidates which resulted in every Republican judge to be ousted from their court. He played the Republican Party. Idiots.

So is Buzbee a republican? You’re damn right he is. His support of trump and the Pastors Council should disqualify him for Mayor and solidify him as another politically ignorant ahole.

This entry was posted on Thursday, May 2nd, 2019 at 3:25 pm and is filed under Uncategorized. You can follow any responses to this entry through the RSS 2.0 feed. You can leave a response, or trackback from your own site.