In the words of Hank Hill, that boy ain’t right.

Houston Police Union President, Joe Gamaldi, is sowing discontent between the Houston Police Department and the Harris County District Attorney’s office. (More about that later) It’s probably because he is trying to divert attention away from his ill advised press conference after the botched raid resulting in 4 Police Officers being shot. Here’s the story from Click 2 Houston:

After the botched raid, while our officers were recovering in the hospital, Gamaldi went on a tirade blaming activists. Here is what he said: 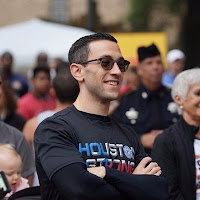 The fallout from the botched raid is going to be felt for a long time. Cases have been dismissed due to the actions of the Police Officer responsible for the botched raid. Indictments are sure to follow. Gamaldi ought to do everyone a favor, let our HPD do their jobs, and shut the hell up for a while.

This entry was posted on Wednesday, May 22nd, 2019 at 11:54 am and is filed under Uncategorized. You can follow any responses to this entry through the RSS 2.0 feed. You can leave a response, or trackback from your own site.