That must have hurt.

After Buzbee sucked up to the Fire Fighters Union for months for his run for Mayor, the Union decided to endorse City Councilman Dwight Boykins only a day after he entered the race. Both are courting the Union by claiming they would fund their 25% increase in pay but both are not able to pay for it. Boykins attempted to call for a increase of $25/month on garbage collection which failed. Buzbee has no stated plans. Boykins conceded to the fact that there needs to be a revenue increase to avoid layoffs:

“I believe this solution is a fiscally responsible option, and it’s only an option, that would eliminate the need to lay off city employees,” Boykins said during the Council meeting.

Unlike Buzbee Boykins has qualifications to be Mayor. He is not politically ignorant. Hopefully that is why the Union endorsed Boykins over Buzbee. Buzbee fired back claiming he was campaigning on city property courting the Fire Fighters vote: 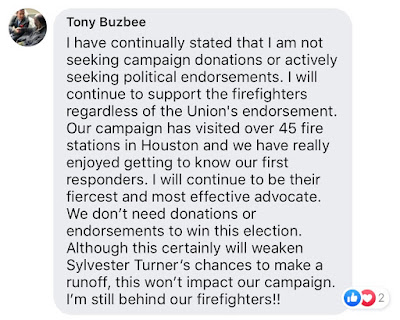 I’ve got a problem with the Union on this issue. I believe they are not being honest about how to fund for this increase in pay, one they deserve. Boykins, at the very least, understands that funding issue. Buzbee on the other hand might want to check on the laws concerning campaigning on city property and during office hours before visiting Police Stations.

This entry was posted on Saturday, June 8th, 2019 at 12:33 pm and is filed under Uncategorized. You can follow any responses to this entry through the RSS 2.0 feed. You can leave a response, or trackback from your own site.