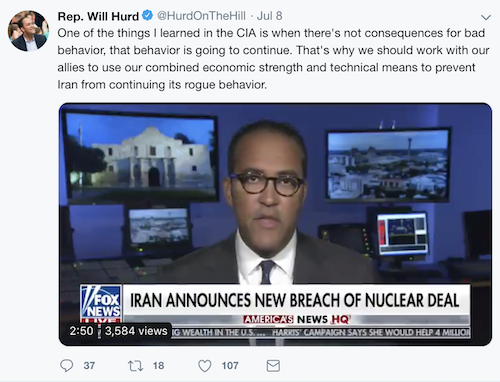 Texas Congressman William Hurd CD 23 seems to have forgotten that under the Obama administration Iran agreed to stop enrichment of nuclear material.

According to the joint statement in Switzerland, the P5+1 countries and Iran agreed on a framework for a deal. According to this framework, Iran would redesign, convert, and reduce its nuclear facilities and accept the Additional Protocol (with provisional application) in order to lift all nuclear-related economic sanctions, freeing up tens of billions of dollars in oil revenue and frozen assets.

Trump, with Hurd’s backing, pulled the United States out of the deal without having negotiating a new one. Now Hurd is complaining that Iran is, once again, starting up their nuclear development. Duh! This is a problem Trump created, once again. He has no idea or capability to make any kind of international deal. Instead of having an international agreement we have nothing. And nothing is better than anything Trump can negotiate. Literally.

Hurd can’t hear the laughter of the international community. Or us.

This entry was posted on Tuesday, July 9th, 2019 at 8:40 pm and is filed under Uncategorized. You can follow any responses to this entry through the RSS 2.0 feed. You can leave a response, or trackback from your own site.