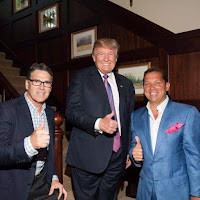 It is official. Tony Buzbee plans to use his personal wealth to buy a Mayoral race. Much like Texas Representative out of Galveston “Money” Mays Middleton who spent over $2 Million of his own money to buy his seat, Buzbee has now donated a total of $7,500,000 to his campaign. $7,500,000.

Hopefully he will become like his other republican buddy, Kathaleen Wall who spent over $6,000,000 and lost in the primary. Buzbee is trying to be another Trump. He is loud, politically ignorant, rich, and an asshole. Just. Like. Trump.

This entry was posted on Friday, July 12th, 2019 at 11:21 am and is filed under Uncategorized. You can follow any responses to this entry through the RSS 2.0 feed. You can leave a response, or trackback from your own site.