Tx Congressman Pete Olson, leaving with egg on his face 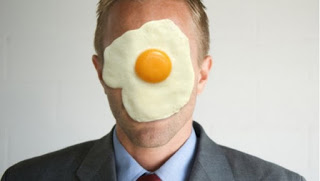 One of my previous post needs an update. Texas Congressman Pete Olson has decided to spend more time not defending the indefensible Donald Trump. Olson has tired of being expected to carry Trump’s jock strap since he was in a very safe deep red district. His opponent in 2018 changed that losing by only a couple of points. So as any coward would do, Pete Olson is quitting.

I can no longer take a back seat in Donald Trump’s golf cart and be expected to defend his positions on racism, the deficit, our growing debt, the disrespect for the press, mocking of the disabled, disrespect for women, minorities, and non-christians. This is not the Republican Party I proudly belong to.

Ok. That isn’t what Pete said, but it should be. I’ve written about Pete’s great legacy before. Here is a clip of when I confronted Olson with some uncomfortable facts.
Health care stuntIn his only town hall meeting held in LaMarque back in 2009, Olson was taped using a woman and her son as props in a failed attempt to warn about the Affordable Care Act. He described how the private insurance industry and private hospitals and private medical doctors turned down a treatment for her son. She eventually received the care (provided by government provided healthcare) but Olson went on to claim that under the government’s Affordable Care Act, she would have been turned down.
Someone (me) with a camera yelled “THE GOVERNMENT DIDN’T TURN HER DOWN! THE PRIVATE SECTOR DID!”. Olson looked like a deer caught in the head lights of a truck. His look of stupidity earned him a spot on Keith Olberman.

This entry was posted on Friday, July 26th, 2019 at 12:04 pm and is filed under Uncategorized. You can follow any responses to this entry through the RSS 2.0 feed. You can leave a response, or trackback from your own site.