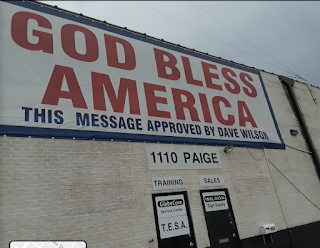 There are many reasons not to vote for Dave Wilson.

Dave Wilson is such a horrible candidate even the Harris County Republican Party wouldn’t endorse him and these are the guys who endorsed Anthony Dolcefino and Eric Dick. Being qualified to sit at the table of the 4th largest city in the country is not a prerequisite for their endorsement. At least they didn’t endorse BuzzedBee. But…back to Wilson.

Wilson started the year with a $13,000 loan to his campaign. In his July report he moved into the district at 1110 Paige Street that looks more like a business facility. He had no other activity. In Oct he moved again, this time to an apartment complex at 2100 Tannehill. He also spent $9181 from his own pocket leaving the $13,000 untouched although his loan balance mysteriously disappeared.

And finally in his 8 day out report he spent $8100 of his own money. His outstanding loan is no longer outstanding since it has been zeroed out. Although I believe as a matter of transparency he is required to show the outstanding loan, its not like it was ever going to be paid back since no one has contributed to his campaign. And rightfully so. He sucks as a candidate.

Bottom line he is hasn’t raised any money.

This entry was posted on Wednesday, November 13th, 2019 at 1:32 pm and is filed under Uncategorized. You can follow any responses to this entry through the RSS 2.0 feed. You can leave a response, or trackback from your own site.