More on Dick and the Harris County Democratic News

Recently an organization called the Harris County Democratic News released a mailer with pictures of Black elected officials such as President Obama, State Representative Senfronia Thompson, and others with the back endorsing people of color except for one, Eric Dick. Some have wondered who paid for this mailer and maybe I found out that it is only one person, the white one.

According to the City of Houston website, there is only 1 contributor to the Harris County Democratic News and that is Eric Dick for a total of $8500. The address of this news is 1918 Freeman Houston Texas 77009 and owned by Philip Bryant. The HCDN is not registered with the Texas Ethics Commission.

This is definitely strange since there is no political disclaimer so filing an ethics complaint will be challenging. 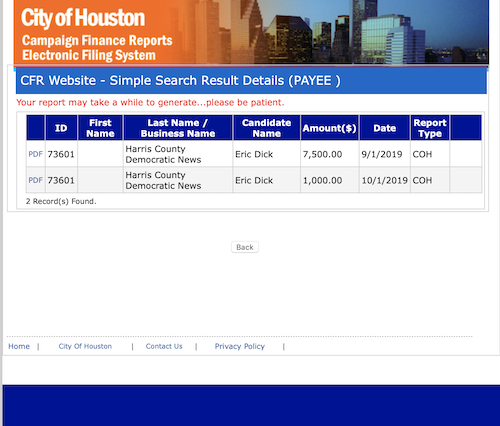 This entry was posted on Sunday, December 1st, 2019 at 4:41 pm and is filed under Uncategorized. You can follow any responses to this entry through the RSS 2.0 feed. You can leave a response, or trackback from your own site.