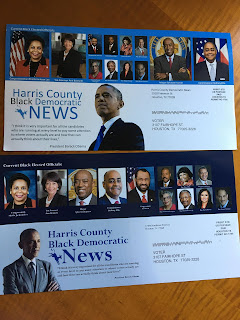 Eric Dick is a republican and he is representing the party very well, just like Buzbee.

Once again Eric Dick has sent another round of his misleading campaign mailer. As with the last one, it features pictures of President Obama, Congresswoman Sheila Jackson Lee, Ann Bennett, and other local Black elected officials. On the back is a list of endorsements from a group called “Harris County Black Democratic News” a group, if it exists, is not associated with the Harris County Democratic Party.

The mailer implies Eric Dick is being endorsed by these Black elected officials. They have not. And these mailers are being sent to the Black community. If it isn’t illegal, it is extremely dishonest.

The mailer has a new return address of 17484 Northwest Freeway, which is assigned to Minuteman Press. The previous mailer used the address of 1918 Freeman Houston Texas 77009 and owned by Philip Bryant, a personal friend and client of Eric Dick.

And once again, there is no required “Political ad paid for by” disclaimer, a clear violation of the Texas Ethics Commission laws. The fine could be as high as $4000. According to Title 15 Section 255.001:

A person may not knowingly use, cause or permit to be used, or continue to use any published, distributed, or broadcast political advertising containing express advocacy that the person knows does not include the disclosure required by Subsection (a).

Unfortunately complaints to the Texas Ethics Commission, the DAs office, the County Attorney’s office, or the Texas Bar will not stop Dishonest Dick’s mailers until months after the election. By then the damage has been done.

There ought to be a law.

This entry was posted on Friday, December 6th, 2019 at 12:32 pm and is filed under Uncategorized. You can follow any responses to this entry through the RSS 2.0 feed. You can leave a response, or trackback from your own site.

One Response to #DishonestDick strikes again.