Well that wasn’t fun, for some. 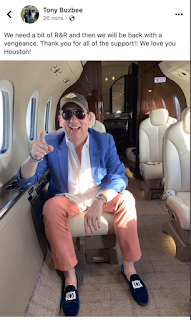 Overall
Buzbee lost and that was good for the city. Up till the day of the election Buzbee clearly showed he had no idea of how the City works or how to govern. To him is was about money, his money, and how he could buy a seat. He lost $13 Million. We won. District B is in the courts and will be decided at a later date. Two women joined the members of the At Large delegation. 8, maybe 9 out of 16 members of Council are women. Chris Brown returns as Controller.

Media Bias
Back in 1995 Wayne Dolcefino was an investigative reporter (sic) for KTRK-TV. He had a boner for Sylvester Turner when Turner first ran for Mayor. Dolcefino was eventually sued and lost for a story about insurance fraud and a jury awarded $5.5 Million.

We ought to have an award for those in the media who chased stories that left them with egg on their faces. Fox26 would easily be in the running. They are becoming the FoxNews of Houston. This isn’t good. I used to work with a reporter at Fox26. He was fair and asked the tough questions. That was all I wanted or expected. Professional. Respectable. This is lacking at Fox26 now.

Don’t be a a Dick law.
Eric Dick’s racist mailer cannot go unchallenged. He needs to suffer what ever consequences there may be. Unfortunately the Texas Ethics Commission does not have a rapid response process that would put Dick on notice. Instead a complaint takes months to resolve. We need a “Dont be a Dick” law.

Before you run for office
Do yourself and us a favor, think before you jump into a race you know nothing about. We had way too many candidates who could not, would not, raise money and who have no business running for office. This isn’t a game.

Self Financing
There ought to be restrictions on self financing Buzbee put in $13 Million of his own money. Eric Dick put in $300,000. Money Mayes Middleton put in $2.5 Million for a House Race. The list can go on and on. This has to stop.

On to the primaries!

This entry was posted on Monday, December 16th, 2019 at 1:24 pm and is filed under Uncategorized. You can follow any responses to this entry through the RSS 2.0 feed. You can leave a response, or trackback from your own site.