When you support Trump and lose, you whine

Leave it to a trump supporter to whine about losing much like Trump will do in 2020.

Colby Covington is a trump loving UFC fighter. He brags about being on the trump train, wears the MAGA hat, wears the garb. He has met trump in the White House. He hangs around with the trump dummies, Eric and Jr. He shoots his mouth off….until last Saturday night.
At UFC245 Covington got his jaw broken and his ass kicked. He was bloodied, beaten, cut and he ran out of the ring instead of waiting, as customary, to be interviewed. But that still didn’t stop him from doing what a trump does, whine, on twitter, at night.

And even his supporters aren’t having it, again much like trump. This is what bullies do. This is what trump does. They talk big. They act big. And they get their ass kicked. More of this is coming in November. 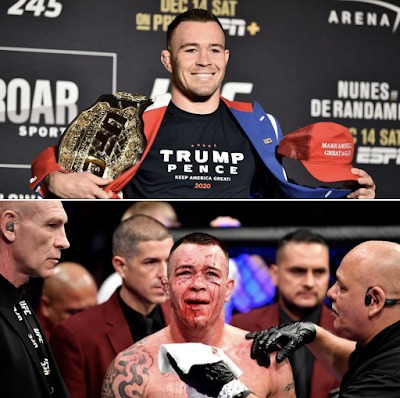 This entry was posted on Tuesday, December 17th, 2019 at 12:51 pm and is filed under Uncategorized. You can follow any responses to this entry through the RSS 2.0 feed. You can leave a response, or trackback from your own site.