There is a limit of $2700 per person for a candidate running for a federal office. $2700 for the primary and $2700 for the general election. So what is going on with the Pierce Bush campaign?

According to his latest campaign finance report Bush raised $663,092 most coming from donors donating over the $2700 limit. As an example: 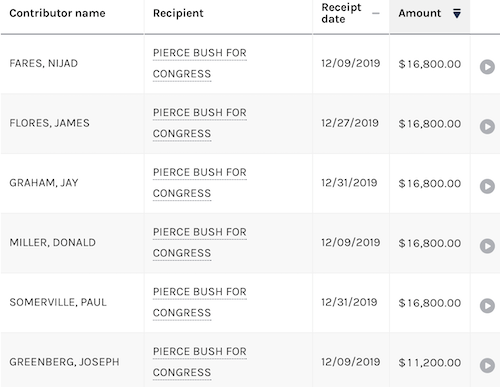 According to his reports Nuad Fares has donated over $92,000 in this period, a tab bit over the $2700 limit. The Fertitta family has donated $84,000, with Tillman giving $42,000. The Bush family each gave $8400 for a total of $142,000.
The Alvis family out of Austin donated over the limit but there is a note on their donations redesigning the donations to the primary and to other family members.

This is new to me, literally. I’ve seen many reports filed with the Texas Ethics Commission but not many with the FEC. It’s strange, but then again, it’s a Bush.

This entry was posted on Saturday, February 1st, 2020 at 1:03 pm and is filed under Uncategorized. You can follow any responses to this entry through the RSS 2.0 feed. You can leave a response, or trackback from your own site.