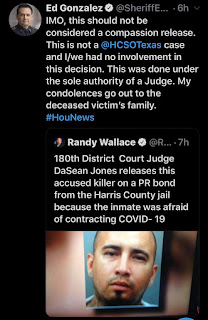 One of the reasons we need to rid our party of the socialists who run as Democrats.

Harris County Judge DaSean Jones has come under fire for releasing a suspected murderer. Jones is one of 2 socialist who ran as Democrats and won. The Harris County Sheriff was not very happy about this decision. From the Houston Chronicle:

The judge did not reduce the bond as Cruz had requested, but let him go without paying his original $60,000 bond upfront, instead he asked for a 3.5 percent payment to pretrial services.

The members of the Democratic Socialists of America saw an opportunity after the 2016 election.

Democratic Socialists of America Organizer Christian Tyler was quoted in the article saying: “We can defeat the Democratic Party locally to crush it nationally which would hopefully lead us out of pre-party formation and into something like the [British] Labour Party.”

Judge Jones is a member of the Houston Chapter of DSA. So is his wife, Audia Jones who ran for Harris County DA and lost by 40 points. A socialist on top of the ticket gets wiped out one on one but Judges in 2018 benefited from straight ticket voting. Straight ticket voting will not be available in Texas for any future elections.
The socialist running for DA in various counties in Texas are advocating for what looks like bail forgiveness instead of bail reform. They have found a nitch market running as Democrats in deep blue areas much like Alexandria Cortez Ocasio did. Luckily most are losing in fact 73 of 80 lost in 2018 a banner year for Democrats across the country.
Judge Jones should be one to target in 2022. We do not need socialists running as Democrats.

This entry was posted on Saturday, March 21st, 2020 at 5:57 pm and is filed under Uncategorized. You can follow any responses to this entry through the RSS 2.0 feed. You can leave a response, or trackback from your own site.