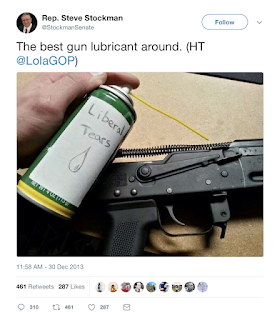 Steve Stockman was elected to congress to serve in Texas Congressional District 9. He served 1 term. He returned 16 years later and won in the newly created district 36. He served one term and then was convicted on 23 of 24 felony counts. He is serving a 10 year sentence in federal prison.

Stockman represented the Clear Lake area for 2 years and was nothing but a jackass. He accomplished nothing. His entire 2 years was devoted to making wise ass comments on twitter, questioning Obama’s place of birth, and gun nuttery.

He doesn’t deserve a pardon which is probably why he will get one.

This entry was posted on Saturday, April 11th, 2020 at 12:31 pm and is filed under Uncategorized. You can follow any responses to this entry through the RSS 2.0 feed. You can leave a response, or trackback from your own site.