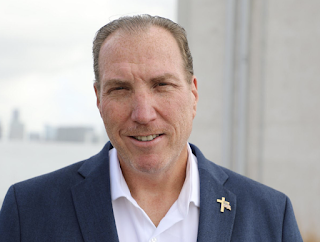 Keith posted a racist meme (which has been removed) on Facebook quoting Martin Luther King. The meme also had a pic of a banana next to the Black civil rights leader’s quote. It wasn’t a fruit salad, or a medley of fresh tropical fruits and he wasn’t in the middle of a well balanced meal when he created the meme. It was a banana. It was racist. We know it. He knows it. The Pasadena City Council knows it and took action.

Keith is, or was, the Chair of the Pasadena Planning Commission. City Council Member Cody Ray Wheeler called on the Mayor to remove him. From his letter to the Mayor:

I am writing to demand the removal of Keith Nielsen from the Pasadena, Texas Planning Commission following his racist social media post.

In a city with a dark history of racial oppression, the former home of the Ku Klux Klan, it is our duty as leaders to remove racism in every form, stem and root. In the midst of national outrage over the murders of people of color, Keith Nielsen’s recent actions have done nothing but fan the flames and cause more harm to the people of our community. I urge you to Immediately strip Keith Nelsen from his position so we can move on from this disgrace and begin the healing process. Every day Keith Nielsen remains, is an endorsement of his racist views and cast a dark shadow over our city and your leadership.

It is incumbent on all of us, that no position of power be held by a person with racist views.

The city took quick action. Keith has lost his position. Now it is up to the Harris County Republican Party to decide what to do with Keith. The choice is pretty clear. In 2018 their party cratered, losing every seat to a Democrat, except one. It’s not going to get any better especially when the leader of their party is a racist in chief.
In the words of their great leader: Let’s see what happens. 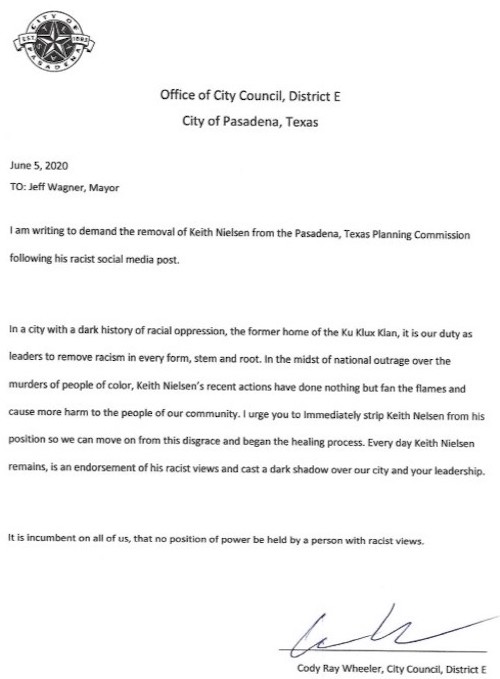 This entry was posted on Saturday, June 6th, 2020 at 12:08 pm and is filed under Uncategorized. You can follow any responses to this entry through the RSS 2.0 feed. You can leave a response, or trackback from your own site.