Another republican losing their job over a tweet in Houston 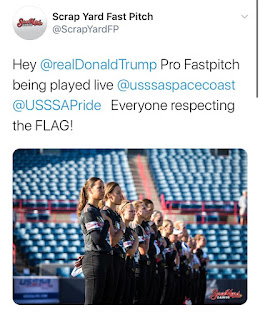 How stupid can trump people be? Ask the General Manager (or it might be the former GM this afternoon) of the Scrap Yard professional softball team out of the Woodlands. From Sports Illustrated:

During a game against USSSA Pride, another independent pro softball team, a tweet was posted on Scrap Yard’s Twitter account with a picture of players standing and the words, “Hey @realDonaldTrump Pro Fastpitch being played live @usssaspacecoast @USSSAPride Everyone respecting the FLAG!”

The team members have since quit and will be looking for other teams to play with. The General Manager, Connie May was responsible for the tweet and defended it. Just this month she was promoted to the new regional director for the Unites States Specialty Sports Association (USSSA) of the greater Houston area.
So because of this politically and racially charged tweet, the GM has lost her team, the team has lost their team, and the opponents have lost a team to play against.
By this afternoon I would bet the GM will have lost her job joining the Harris County Republican Party Chair-elect. The USSSA Pride Team has responded: 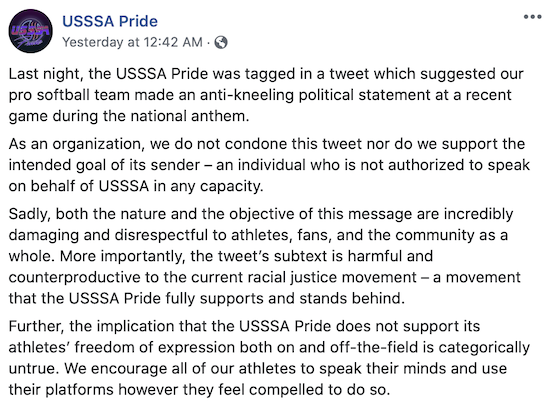 This entry was posted on Wednesday, June 24th, 2020 at 1:26 pm and is filed under Uncategorized. You can follow any responses to this entry through the RSS 2.0 feed. You can leave a response, or trackback from your own site.