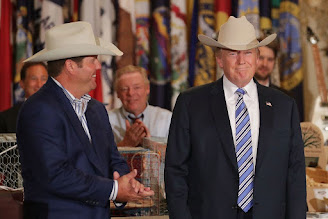 It gets old. Quickly.

Yellowstone started off pretty interesting. You might think Yellowstone is about cowboys in the open, wild, wild West of Montana displaying conservative cowboy values with ranching, bull riding, rustling cattle, living the hard life, making a living wage and working hard. All that noble shit that cowboys are known for.

That isn’t Yellowstone. Instead it’s a modern day cowboy vs Indians movie with the cowboys being a bunch of really fucked up people. It could actually be just a movie about the entire Trump family on a dude ranch vacation.

Kevin Costner is the filthy rich owner of thousands of acres of open land in Montana, butting up against an Indian Nation. He is the Cattle Commissioner with his branded (literally) ranch hands as deputies toting automatic rifles. His daughter is a drunk, power hungry, rotten, spoiled bitch. One of his sons is the family attorney with a bad hair piece and a script designed to show he knows how to lawyer. Like his sister he is an asshole.

There is a lot of killings, stealing, and coverups. The entire family gets away with it. No one is held accountable. There is no one that can’t be bought or killed if they don’t accept their offer. The live in a lawless environment even though Costner is also an appointed official in charge of law and order.

As I said, it gets old. You just can’t wait till someone slaps the living shit out of the daughter or one of the ranch hands gets his ass kicked or gored by a bull. You just want the entire fucked up family to take the family helicopter and disappear in a canyon.

So in short this is a Trump at the Dude Ranch movie. Do yourself a favor and watch something worthwhile.

This entry was posted on Wednesday, September 2nd, 2020 at 8:53 pm and is filed under Uncategorized. You can follow any responses to this entry through the RSS 2.0 feed. You can leave a response, or trackback from your own site.