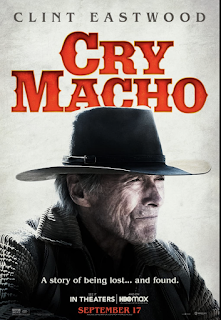 Clint Eastwood’s newest movie, Cry Macho, should have been named “Bore me to death Macho”. That was just plain god awful. As someone who considers themself fairly macho, I was no match for this film. I latest just 42 minutes.

The acting, script, plot, and just about everything else was just plain awful. It wasn’t a waste of talent because there was none. Dwight Yoakam, the father who hired Eastwood to return his son from Mexico, was having a difficult time acting like he was an actor. Eastwood is just a shell of the actor he used to be, old, slow, looking confused. I’m surprised he was able to remember his lines. The boy’s acting was overshadowed by his rooster, a cock fighter, which could easily get an academy award nomination for “Cast member that didn’t suck in a movie”.

The script was worthy of a B movie. The plot predictable, although I didn’t see it completely through, I would guess Eastwood saved the boy and his large cock, fell in love with him, and adopted him as his own son he never had. Whether this is a correct or not really doesn’t matter since I will not be watching another minute of it.

Do yourself a favor. Wait till this movie is available at Redbox. Find a free coupon. Rent it. Give it to your neighbors. When they are watching it, steal their lawnmower. At least you will get something out of it.

This entry was posted on Monday, September 27th, 2021 at 3:14 pm and is filed under Uncategorized. You can follow any responses to this entry through the RSS 2.0 feed. You can leave a response, or trackback from your own site.