It was only a matter of time.

Former candidate for CCISD School Board, Christine Parizo was escorted out of last nights meeting after moving towards the board and disrupting the meeting. The video is below starting at 1:45:25 right after Jay Cunningham had just finished discussing the complaint that Parizo filed with the Texas Attorney General. (The complaint was dismissed) Watch below. Parizo is in the bottom left corner. After Parizo was escorted out Cunningham address the abuse the board has experienced over the last year or so. Cunningham’s comments are worth watching. 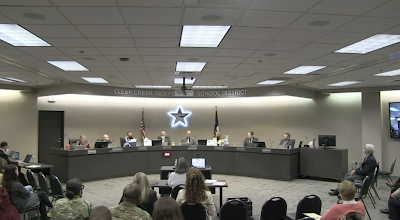 Scott Bowen, who helped Parizo run for office, was pretty quiet the entire time. Like trump he watched as his buddy Christine was removed and Cunningham condemned her actions and those who have been harassing the board over the last year. Scott has contributed to this behavior by Christine and others. As a leader of the Qanon community he could have spread the word to those coming to the meeting to be respectful, truthful, and to act like adults but he didn’t. He left Parizo out to dry.

Could Parizo be banned from future meetings? Probably not but her advancing towards the board could, and should be enough to warrant the board to look into filing charges against her. This year long abuse needs to stop and some people need to grow up.

This entry was posted on Tuesday, January 25th, 2022 at 12:39 pm and is filed under Uncategorized. You can follow any responses to this entry through the RSS 2.0 feed. You can leave a response, or trackback from your own site.