Judge Briones, candidate for Harris County Commissioner, responded to a negative Facebook ad posted by her opponent in the Democratic Primary Runoff, Benjamin Chou. Chou created a Facebook page, Organization to Elect Better Leaders, as well as a twitter account which has 0 followers. According to the page the OTEBL “The mission of the Organization to Elect Better leaders is to make transformative change in our political system by electing ethical leaders.” The hypocrisy makes hypocrites look bad.

According to Briones Chou might have violated a number of Ethics Commission rules such as not putting on a “Political Ad paid for by…” disclosure on the ad, not registering as a PAC, not appointing a treasurer, and not identifying the source of donations. Now I believe if the amount spent is below $500 for the entire campaign these rules may not apply but then again I do not know about PACs. Whoever is advising him should read the rules of the Ethics Commission. His Facebook page and account was created by Human Age Digital who should also know the rules of the Commission. 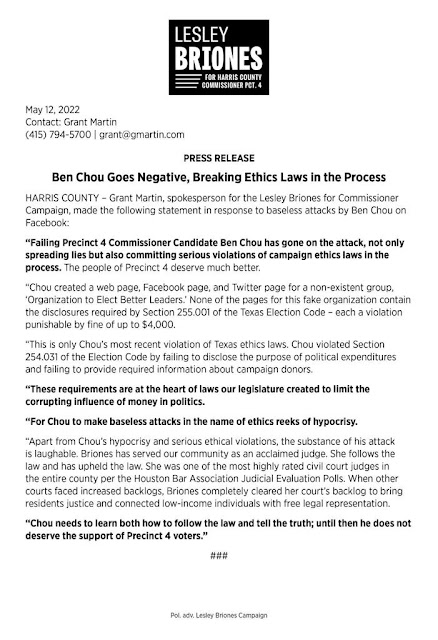 This entry was posted on Friday, May 13th, 2022 at 11:50 am and is filed under Uncategorized. You can follow any responses to this entry through the RSS 2.0 feed. You can leave a response, or trackback from your own site.