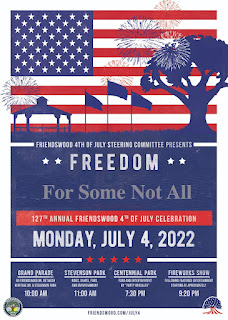 What did you expect from a city that voted overwhelmingly for Donald trump?

Friendswood has a great 4th of July parade every year and each year they pick a Grand Marshal. This year that honor went to Haley Carter a decorated Marine Veteran, a Navy Academy graduate, former goalie for the Houston Dash, Lifetime Girl Scout, and according to the City of Friendswood:

Her personal military decorations include the Defense Meritorious Service Medal and the Navy and Marine Corps Commendation Medal (w/ Gold Star in Lieu of Second Award).

And yet just days after receiving this honor she has voluntarily stepped down due to threats to her family and herself. Yep. This is Friendswood. Turns out Haley is also the Chair of the City of Houston Commission Against Gun Violence.

The City will not replace Haley and they shouldn’t. The trash of Friendswood doesn’t deserve Haley or a parade celebrating our freedom after this display of stupidity. This year’s event theme is “Freedom for One & All”. Maybe the City should cancel the parade until the citizens learn what Freedom for One and All really means.

According to the Houston Press this all started with someone named Jesse Kelly:

It all started with Jesse Kelly, a former Marine, failed Arizona congressional candidate, and radio host on 950 KPRC. He is also, in no particular order, a school shooting skeptic, an anti-vaxxer, thinks trans people are “filth,” and has gleefully (if tacitly) encouraged violence against the left many, many times. He has built a career on being as reactionary right wing as possible.

These threats will continue until someone gets their ass sued. Maybe Haley will do it.

This entry was posted on Friday, June 24th, 2022 at 12:11 pm and is filed under Uncategorized. You can follow any responses to this entry through the RSS 2.0 feed. You can leave a response, or trackback from your own site.