It's hard to feel sorry for Steve Stockman

Former Congressman Steve Stockman representing the Clear Lake area was convicted today on 23 felony counts. Stockman only served two terms, once in CD 9 and another in CD 36 separated by 16 years. He wasn’t a very good Congressman. In fact he is just like Trump. He is an asshole.

Stockman would had fit right into the Trump Administration. He invited Ted Nugent to a State of the Union Address with President Obama. He thought that bringing another asshole like Nugent was cute. It was funny to him.

When he learned to use twitter, he found a new way to be an asshole, again, much like trump. Here was one of this favorites: 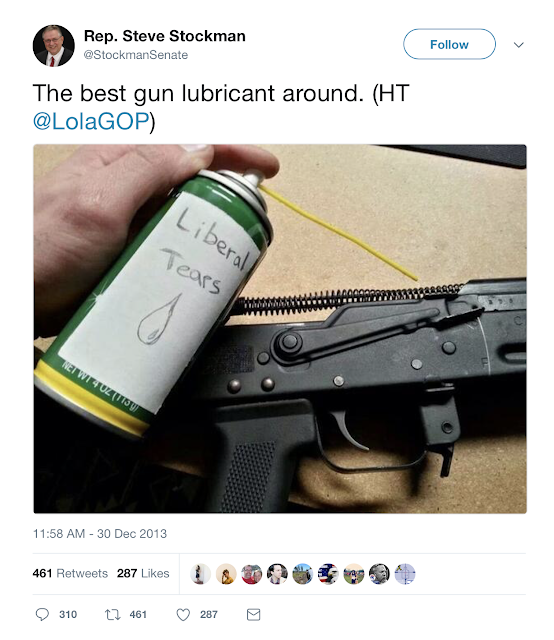 There were more. Many more. Stockman was convicted on 23 of 24 charges. He will spend his days in jail as he awaits sentencing. After the verdict he was escorted out of the courtroom by the US Marshals. From the Texas Tribune:

That verdict puts Stockman — a firebrand conservative who served two nonconsecutive terms in the U.S. House before losing a 2014 challenge to U.S. Sen. John Cornyn, R-Texas — at risk of decades in federal prison. And in the immediate future, it sends him into federal custody, where he will remain pending sentencing in August. U.S. Marshals took him into custody shortly after the verdict was read, over the objections of his lawyers. The prosecution had warned that he might be a “flight risk,” Buckley explained.

That sound you hear is the sound of liberal tears as I cry……..with laughter. That’s mean. Isn’t it?

This entry was posted on Friday, April 13th, 2018 at 12:54 am and is filed under Uncategorized. You can follow any responses to this entry through the RSS 2.0 feed. You can leave a response, or trackback from your own site.