Keep your eye on your dignity 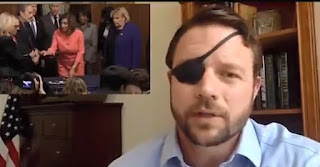 It’s hard to watch someone soil themselves.

Congressman Dan Crenshaw lost an eye fighting for our country and now he has lost his dignity kissing Donald trump’s ass. According to The Washington Post Crenshaw’s video of himself kissing trumps ass was full of misinformation. My favorite is:

Crenshaw adds it was the “same day, Jan. 31, that Nancy Pelosi proposed the No Ban Act, which would actually stop President Trump from implementing the lifesaving travel restrictions that he did implement.”

Pelosi didn’t propose the No Ban Act on Jan. 31. The bill had been introduced by another member a year ago.

This is what the Republican Party has become. A bunch of ass kissing liars. It is who they are. They are Trump.

This entry was posted on Tuesday, April 21st, 2020 at 12:48 pm and is filed under Uncategorized. You can follow any responses to this entry through the RSS 2.0 feed. You can leave a response, or trackback from your own site.