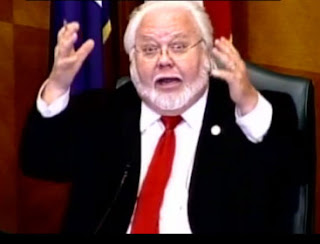 There is so much wrong with what Houston City Councilman Michael Kubosh did yesterday by going to a restaurant which opened against the County’s executive order.

Let’s start with the rule of law. What the hell happened to the Republican Party that once claimed to be the king of the hill when it came to following the law, being tough on crime, and personal responsibility? Kubosh, as an elected official, openly defied a public health order and now that dog whistle tells his white wing followers that civil unrest is OK.

I don’t remember Rosa Parks going to a restaurant to horse down a half dozen chili dogs. I don’t remember her looking for a TV camera. I don’t remember her encouraging constituents to openly defy an order that was put in place in order to protect the health of the citizens of the city. Parks refused to stand to protect her rights as an American and a human being.
Kubosh, a sitting City Council member, sat his fat ass down to stuff his face, wipe his face, then put his face on TV to blow his dog whistle and declare himself the civil disobedience leader of Houston.
In the words of the Harris County Judge: “It’s sad”.

This entry was posted on Saturday, April 25th, 2020 at 12:37 pm and is filed under Uncategorized. You can follow any responses to this entry through the RSS 2.0 feed. You can leave a response, or trackback from your own site.