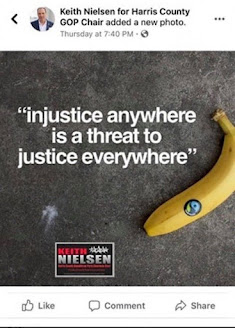 Well no one saw that coming.

The Harris County Republican Party officials embraced their new chair, Kieth Nielsen. Nielsen was asked by Lt. Gov. Dan Patrick to resign his seat before officially accepting the position for his racist post concerning a Martin Luther King quote. That racist quote cost him his position as the Planning Commissioner of Pasadena. He also claimed he would not accept the position, one he had just recently won.

When Dan Patrick calls for you to resign, whatever you did must be really, really, bad, like racist bad. Patrick is the low life of the Republican Party and when he is calling for you to resign, you might want to consider doing something different with your meme generating skills. Dan Crenshaw also called for Nielsen to resign. He told him to fuck off.

Nielen was eventually sworn in. And the executive committee welcomed him even after over 100 chairs wrote to him thanking him for not taking the position. He lied to them. This is the new Republican Party. This is who they have become. They tolerate racism. They tolerate those who promote racism.  It starts at the top.

This entry was posted on Tuesday, September 1st, 2020 at 12:17 pm and is filed under Uncategorized. You can follow any responses to this entry through the RSS 2.0 feed. You can leave a response, or trackback from your own site.