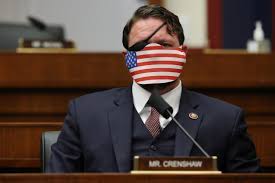 No Place but Texas.

Remember when the Democrats in Texas called for the overturn of the election after trump won with the help of Russia? Neither do I.

The following Texas Congressmen have signed on in support of overturning the election like a bunch of whiny ass little bitches. Included in this list is the republican darling, Dan Crenshaw. Crenshaw will be running for president as a trump republican in 2024. This is who they are.

Missing from the list is Brian Babin (Racist) of Vidor.

This entry was posted on Friday, December 11th, 2020 at 12:58 pm and is filed under Uncategorized. You can follow any responses to this entry through the RSS 2.0 feed. You can leave a response, or trackback from your own site.